Millions of butterflies in their winter home

*Please be advised, we will be implementing a COVID-19 surcharge to all departures in order to cover costs of reduced group sizes and supplies necessary for sanitizing. Thank you for your understanding and continued patience. 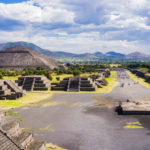 The City of Teotihuacan was built between 100 BC and 700 AD housing over 200,000 people making this one of the most impressive archaeological sites in Mesoamerica. The city was abandoned when the Aztecs arrived in 1200 AD and according to Aztec legend, the sun, moon and entire universe were created there. It was a very powerful metropolis during its heyday. View the Citadel, the Temple of Quetzalcoatl, the pyramid of the Sun, the pyramid of the Moon, and other monuments along the Avenue of the Dead.

Later, visit the Basilica of Our Lady of Guadalupe, known as the holiest place in Mexico and one of the most important pilgrimage sites of Catholicism. This national shrine holds the cloak containing the image of the Virgin. The cloak, framed above the central altar, has defied analysis by experts for centuries and the image inspired Mexicans during the war of Independence. It has since been copied universally. Inspired by the miracles of legends, millions of people visit the new and old basilicas each year. The history of the site is as mysterious as it is fascinating.  Pilgrimages have been made to this shrine since 1531 as Our Lady of Guadalupe still substantiates the faith of Catholics in Mexico and Latin America. 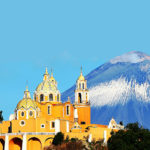 Located about 78 miles from Mexico City are the cities of Puebla and Cholula. In Cholula, visit the largest pre-Hispanic structure on the continent. The towering great pyramid of Tepanampa is topped by a Spanish church, in addition to a subterranean maze on the grounds to explore. We also visit the town of Tonantzintla, well-known for its pottery. This is a great place to admire the view of the volcanoes, Popocatepetl and Ixtaccihualt.

Adjacent to Cholula, lies the City of Puebla de Los Angeles which was founded in 1531 and is the capital city of the state of Puebla. The city has a collection of rich colonial church structures and ornate buildings of magnificent stonework, adorned with gold leaf and the famous Talavera tiles that cover the church domes, fountains, and also kitchens. In the main central plaza, view the great architecture of the Cathedral and walk along spacious sidewalks under the massive arches that house cafes and many kinds of shops.  Visit Puebla, Cholula, & Tonatzintla

We will enjoy a city tour with a visit to the “Plaza de Los Sapos” a bohemian place full of cafes, art studios, antique shops, bars, and bazaars. Lunch will be at a typical Puebla restaurant.

Price does not include additional hotel room night. Please inquire for current pricing.